New Jersey currently imposes the second lowest state tax on gas at 14.5 cents-a-gallon  The 23 cents-a-gallon increase, the first gasoline tax increase since 1988, will bring New Jersey gas prices roughly in line with the national average of $2.23.  The funds from the gasoline tax will be used to replenish the state’s bankrupt Transportation Trust Fund. The fuel tax is estimated to generate $1.2 billion in annual revenue; this along with $800 million the state expects to borrow annually will allow New Jersey to spend $2 billion a year for the next eight years to rebuild the state’s crumbling infrastructure. The agreement will immediately put thousands of construction workers back to work. All non-essential transportation projects have been shut down since July, 2016 resulting in the loss of at least 4,000 construction jobs.

Sales Tax Rate to be Reduced 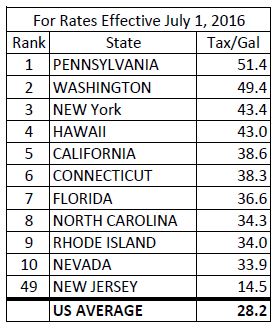 The agreement also calls for the phasing out of estate tax, tax exclusions on pension and retirement income of seniors, and an increase in the state’s income tax credit from 30% to 35% of the federal credit.  The Office of Legislative Services estimates that the deal will result in $1.3 billion in lost revenue by 2021.

The lawmakers are set to vote on bills A-10 and A-12 on Friday, October 7th, and it is widely expected to pass. If passed, the gasoline tax increases will be implemented 14 days after Governor Christie signs the bill authorizing the increase or in November 1, 2016 (whichever is later), but the tax cuts will be phased in over time.

To view the Press Release from the Office of the Governor Click Here.