So what’s next for click-through nexus – not much. With the recent Colorado victory over the Direct Marketing Association and the continued litigation regarding economic nexus rules we do not anticipate any further activity regarding new click-through nexus legislation. We have rarely seen this rule practically applied to our clients or the many sales tax audits we have assisted with over the past five years. However, we expect major compliance implications form the pending remote seller reporting requirements rules and economic nexus cases. For a primer on click-through nexus, read on.

In general, retailers are required to register and remit sales tax in any jurisdiction where a retailer has nexus. Nexus is established as having property, employees or actively transacting business within a jurisdiction. As the internet has evolved to become a larger avenue for sales, online retailers have been able to avoid registering and remitting sales tax.  This is because they do not establish nexus in the historical sense. To reverse the loss of sales tax revenue, states are expanding with their definition of nexus.

The History of Click-Through Nexus

Since 2008, many states have considered and enacted laws to tax remote sellers. New York was first to propose a “click-through nexus” law.  This law is popularly been referred to as “Amazon law” (since the intent is to target large online retailers like Amazon). The law targets online retailers who solicit business by entering into agreements with persons domiciled in New York State who refer customers to online websites. The state now considers displaying a link on a website for consideration to be sufficient for a business to qualify as an agent.  Therefore, giving the retailer a physical presence and requiring them to register and remit sales tax.

SB 352 was enacted by Illinois to replace the previous law that was struck down by the Illinois Supreme Court in 2011 for violating the Internet Tax Freedom Act (“ITFA”). SB 352 aims to be fairer by including additional types of referrals including sources such as print and broadcast. The original law was believed to discriminate against internet commerce. The new law requires an out-of-state retailer to register and remit sales tax if they realize at least $10,000 in gross receipts sales to customers referred from Illinois affiliates.

On January 15, 2015, Michigan passed a “click-through nexus” law. Like most states, a seller is presumed to be doing business in the state if the seller enters into an agreement with a resident of that state for a commission or some other type of consideration. The conditions are that over $10,000 in sales are made through residents with this type of agreement and over $50,000 in cumulative gross receipts to all purchasers in Michigan.

Connecticut enacted a law on May 4, 2011, that required out-of-state retailers to collect sales and use tax on purchases made from referrals from in-state affiliates. The State has since passed new laws revoking this and instead “economic nexus” is their new focus.  Currently, if an out of state retailer required to register with the secretary of state and to collect and remit sales tax  if it is making gross receipt sales in excess of $500,000 from Connecticut sources.  However, if a retailer registers with the Secretary of State before reaching the $500,000 threshold, they would automatically have nexus in the state and are required to collect and remit sales tax.

Florida has not enacted any such laws yet. They had discussed amending the statutes to include internet sales, but the provision failed to pass.

Texas does not have laws specifically for “click-through nexus”,  their definition of a “retailer engaged in business in the state” is broad.  They do this to include out of state sellers with relationships with residents in the state which an out-of-state retailer uses for advertising purposes. Tex. Tax Code Ann. § 151.107(b) states, “The agency relationship recognized by this subsection is for the sole purpose of providing a presence in this state for the imposition of a tax on out-of-state advertisers or sellers.” Many states use the terms solicitation and advertising which can be a little confusing. Typically, “solicitation” is described as any agreement set in place where a commission or some consideration is exchanged.  Advertising is characterized by not having an agreement and only having a promotional presence. 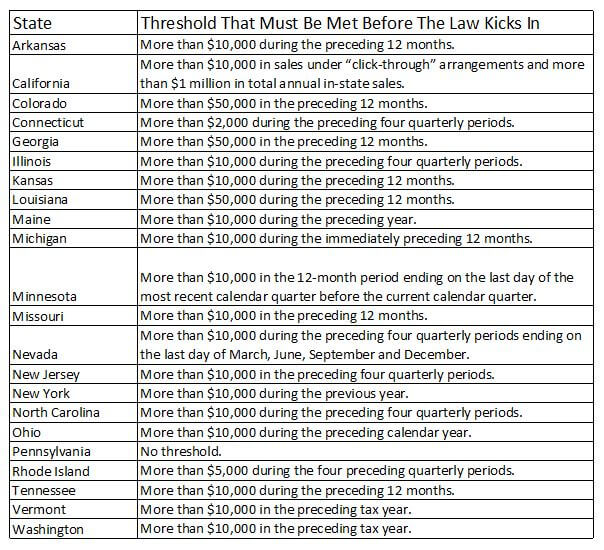