What Is Use Tax Reporting Requirement?

Use tax is imposed on the use of taxable items and services in a state when the sales tax has not been paid. For example, use tax would be due if taxable property is purchased from a seller located outside of New York, the property is used in New York, and sales tax was not paid on the purchase.

With online platforms and sales being increasingly popular, this concept is significant. Remote retailers that make sales into a state but do not have any presence there (i.e. an office, store, storage, employees) may not be registered to collect sales tax in that state because of the lack of presence. However, the use tax reporting requirement that has been recently implemented by a number of states requires remote retailers to notify their customers that they may owe use tax on their purchases.

Colorado passed a law in 2010 informing retailers that those who sell to customers in Colorado but don’t collect sales tax, now have an obligation to do so. The Direct Marketing Association filed a lawsuit, claiming that this reporting requirement violated the Commerce Clause (which gives Congress the power to regulate commerce) and discriminates against interstate commerce. Colorado’s law also challenged the physical presence nexus standard that was enacted by the U.S. Supreme Court in 1992 with Quill Corp. v. North Dakota. The physical presence nexus standard requires a retailer to have a physical presence in a state in order for a state to require a retailer to charge, collect, and remit sales and use taxes on its taxable sales. Under Quill, a state does not have the authority to make a retailer collect sales and use taxes from its customers in its state unless the retailer has a physical presence. 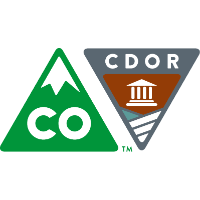 After much dispute, the Colorado Department of Revenue appealed this ruling to the 10th circuit. It was decided that there is no discrimination due to the fact that the law does not view purchases as being either in-state or out-of-state activity. Instead, the law determines whether or not a retailer collects Colorado sales or use tax.

The lawsuit was finally settled, on July 1, 2017, and Colorado’s Department of Revenue began the enforcement of the reporting and notification requirements. They have agreed to waive any penalties for failure to follow the law’s notice and requirements for transactions prior to July 1st. This ruling has had a major impact on other states, which have begun to pass similar use tax reporting requirements in order to bring in additional revenue. According to Washington’s newly passed legislation, states are losing out on a lot as, “The legislature finds that states fail to collect more than twenty-three billion dollars annually in sales taxes from remote sales over the internet and through catalogs” (WA Bill 2163 Section 201).

States That Have Imposed a Use Tax Reporting Requirement

Below is a chart of the current states that have imposed a use tax reporting requirement for remote retailers. For many states, a transactional notice will need to be sent or posted that informs in-state customers that sales or use tax is due on purchases made from the non-collecting retailer. The annual statement to purchasers will need to include the total amount paid by the customer for taxable services in the past calendar year.  Lastly, the information on the annual customer information report to be sent to the state’s respective department of taxation or revenue will vary depending on the state. However, for the most part, it will need to contain all of the customers’ names and the total amounts they paid to the retailer during the calendar year. Penalties will apply for each state if they are not in compliance with the law. 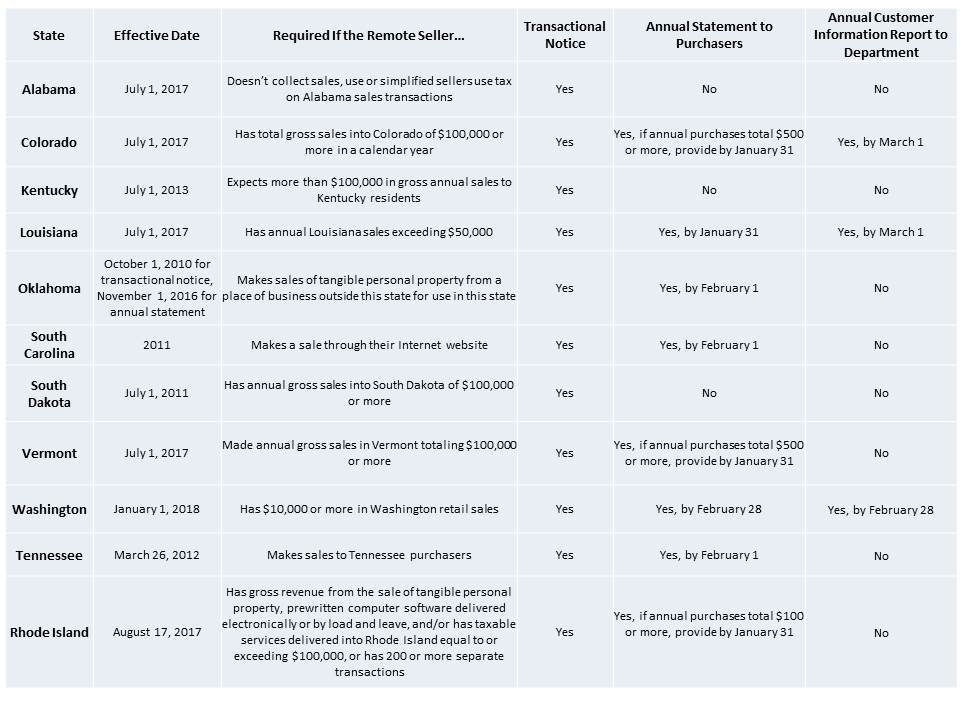 In addition, the chart below shows other states have begun to propose laws that would follow suit with similar reporting requirements. 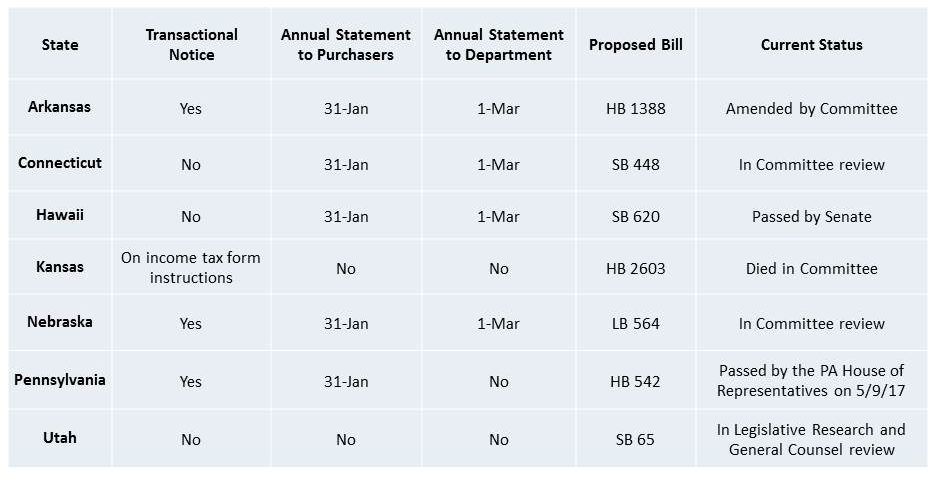 Remote sellers need to be aware of the rules and proposals in place for the states that with which they do business, even if it is only conducted making internet sales. Being informed about current updates will help keep remote sellers compliant with newly authorized reporting rules and use tax collection requirements. As displayed in this article, notice and reporting rules have been proposed by additional states.  It is believed that even more states will continue to follow.